There’s a new buzz around the halls of the high school. That buzz is about the hockey team. Last year, Coach AJ Cloherty led the team to its first winning record in years, and this year they’re off to a strong start with a record of 5-4. Although there are only two seniors on this year’s team, Robert Lunder and Robert Bastone, they provide strong leadership to both the BHHS hockey team and program.

The highlight of the season thus far is their win over section powerhouse, Rye. Sophomore Ryan Cohen said, “It was a huge win. It didn’t surprise us, but it surprised outsiders. We knew that we could beat Rye and we know that we are up there as one of the best teams in the section. This was evidence of that. We have been itching for that statement win since the first day I joined the team last season, and it feels great to be one step closer to where we want to be. We expect to continue to keep winning, get a high seed in sectionals, and make a run at the section title.” 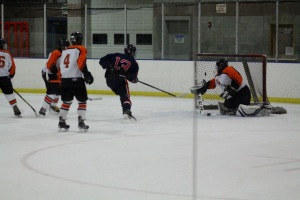 While the team has had great success, it definitely didn’t come magically. The team has been putting in hard work and it is most definitely paying off so far. The season started a week earlier than all other winter sports and they went to work quickly. Only being able to practice on ice twice a week, they had to get practices in, one way or another. It’s been a tradition for a few years now for the team to have 6:00 am practices. As much as it is to condition and get ready for the fast approaching season, it’s also a bonding experience for the team. Senior Captain Rob Bastone says, “I have been a member of the hockey program for six years and watched the team come from winning a single game a year to having a winning record. The hockey team has always been considered a joke at Byram, but I think with all our recent success people are starting to notice all the work and energy we have put in. I am really proud of the team and excited for the rest of the season.”

As many expected, the familiar faces of both Matthew and Ethan Behar, Rob Lunder, and many others have continued to fill up the stat sheet. What people didn’t expect was for 8th grader, Michael Salandra, to burst onto the scene.  Although small in stature, he’s undoubtedly one of the toughest players out there. He gets hit and bounces right back up night in and night out, which is not an easy task. Ryan Cohen added, “Mikey is really something special. He’s only in 8th grade, yet he’s playing major minutes. He’s fearless. He is always the smallest on the ice, but he plays like he’s the biggest. Byram Hills is lucky to have him for 5 seasons.” Along with his brother Nick Salandra, they’ve provided a big boost for the Bobcats on the ice this season. What cannot be left out is the play of junior goalie Grace Lunder who has kept the team in many games this season.

Undoubtedly the biggest game of the season, Pink the Rink, has rapidly approached. Pink the Rink is an annual game against Fox Lane that is a fundraiser for Breast Cancer awareness. This year the bobcats are looking for a victory even larger than last year’s 5-1 victory. Junior Willie Mann is especially excited about this game. He said, “It is a misfortunate to be injured, especially from a silly mistake. Luckily I didn’t have to miss much time. The whole team has supported me and helped me recover, and I am thankful for that. The time really flies by fast, and I am just looking forward to returning to my first game of the season. Pink the Rink is the main event for Byram Hills hockey in the regular season, and I’m glad I can be apart of it for the third time. Watching the boys from the bench has showed me how much I miss the game. I can’t wait to get back out there on the ice in front of everyone and help the team out even more.”

Tomorrow, January 6th is the date of the game and it should be an exciting one. Everyone should come out to support the hockey team and a great cause. Be sure to follow the team throughout the rest of the season as they’re bound to win some more big games and make a deep run in the playoffs!