One thing we, the Byram Hills community, pride ourselves on is our warm and welcoming environment, which is shown through the excitement of our students and teachers in accepting foreign exchange students, making them feel at home. Most recently, I had the privilege of speaking with Seoyeong Bang, a junior from Korea, who is attending Byram Hills High School for the 2016-2017 school year.

I learned from Seoyeong that she discovered Byram Hills High School and arrived here through independent research with the help of an outside agency. With the hopes of becoming a diplomat for the United Nations, Seoyeong believes studying abroad allows her to gain insight on what a career as a diplomat may involve.

Being a foreign exchange student has many benefits, such as providing students with new experiences. Exposure to a foreign country allows students to learn about new cultural and community perspectives, with the overall goal of establishing greater acceptance in society. Additionally, international education has the ability to enhance students’ interests in global issues, as their general knowledge increases while traveling. A common trend seen amongst foreign exchange students is their great growth in maturity upon arrival home. When traveling to an unfamiliar place, individuals are often forced to step out of their comfort zone while maintaining great poise. They are without the comfort of their home, culture, support system, and possibly language, and have to struggle their way through a problem in order to solve the conflict. Foreign exchange students may also become more sensitive to others’ struggles and tend to be more aware while interacting with a group.

Seoyeong has recognized many of these benefits as well, and notes, “Living in American peoples’ homes is a really good experience because I can learn more details about American culture. Even though it’s just one year (actually 10 months), studying in an American high school is a really valued life experience.”

While the benefits of being a foreign exchange student most definitely outweigh the challenges, there are obstacles individuals face throughout their journeys. Firstly, and most obviously, are language barriers. Second are the cultural differences ranging from mealtimes all the way to one’s religious and cultural beliefs, or to something like the school day. Seoyeong shared that using English in her classes has been perhaps the biggest challenge. She also explained that the school day is extremely different in Korea and thus, attending Byram Hills has been a great adjustment. In Korea, Seoyeong’s school day lasted from 7:30 AM to 4:00/5:00 PM, depending on the day. However, the students have a 10-minute break between each class and an hour-long lunch. After school, rather than participating in sports or clubs, Seoyeong had to go to a study hall that lasted as late as 11:00 PM.

In addition to what Seoyeong has gained from attending Byram Hills High School, our community is extremely lucky to have Seoyeong here with us. Through just a brief conversation with Seoyeong, I have learned so much about Korean culture and what it is like to be a foreign exchange student.

Perhaps, one day our very own BHHS students will be traveling abroad during the school year, gaining great cultural and educational life experiences which they will be able to share with family and friends in order to help make our community an even more welcoming place!

Seoyeong with the Science Olympiad team (Image courtesy of Seoyeong). 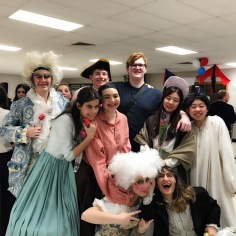 Seoyeong and members of the cast of Les Mis (Image courtesy of Seoyeong). 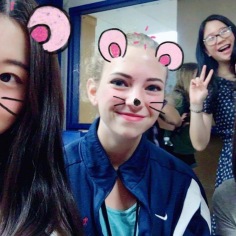 Seoyeong on the Model UN trip (Image courtesy of Seoyeong).