Have you ever seen a bunch of really tall boys roaming through the high school hallways? Well, these boys aren’t just giant figures that can play basketball phenomenally. These boys care about giving back to their community and want to teach their skills to younger athletes who always look up to them.  Literally! On Martin Luther King Day, the Byram Hills Varsity Boys Basketball Team held a clinic that was open to all children, grades 3-6, and all of the proceeds went to charity, specifically the Maria Fareri Children’s Hospital at Westchester Medical Center. The results were especially pleasing with over forty kids in attendance and about $1500 raised.

The Hoops for Hope Clinic was such a success that it is planned to become an annual event! Coach Repa claimed that it “was a great opportunity for the team to both give back to the community through working with the Jr Bobcats youth basketball kids, while at the same time raising money for Maria Fareri Children’s Hospital”. He also wanted to give a special thank you to “Sammy and the Goldman family for helping to organize [the event], as well as Kevin Cook of the Jr Bobcats for doing much of the behind the scenes work.” Lots of work went into this day to make it as great as it turned out to be. Sam Goldman, a senior who has been playing on the team since freshman year, excitedly stated that the event was a “great experience, and [he] really enjoyed giving back.” To Sam, “the court has always been a happy place, and being able to share that joy with those kids felt immensely rewarding”. Through the event, these boys were able to be aware of the large amount of lives that they could affect by playing the sport that they really enjoy.Winning clearly happens on and off the court! Kudos to the BHHS Basketball team for running this event and to all of the people that helped to make it happen.  It was a fun day for all! 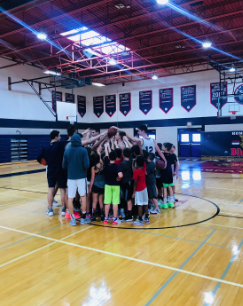